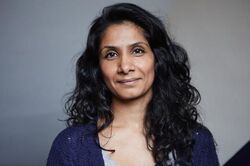 Balvinder Sopal has appeared in Emmerdale in three minor roles:

Balvinder graduated from the University of Huddersfield in 2001 with a degree in Theatre Studies with Media. Since then she has gone on to appear in several television programmes including Hollyoaks, Call the Midwife, Doctors, Coronation Street, Waterloo Road, Five Days, Autonomy of Crime and White Girl. She also has extensive theatre credits.

Retrieved from "https://emmerdale.fandom.com/wiki/Balvinder_Sopal?oldid=160137"
Community content is available under CC-BY-SA unless otherwise noted.