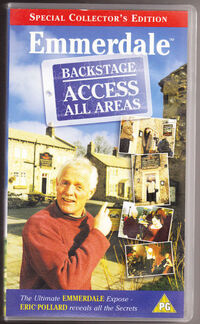 On 4th June 1999, Video Collection International and Granada Media released a VHS entitled Emmerdale: Backstage Pass. Running at 75 minutes, the VHS was presented by Chris Chittell and included various clips from over Emmerdale's history with a look behind the scenes at the making of the programme.

Christopher Chittell, alias sneaky antiques dealer Eric Pollard, takes you behind the scenes of long-running agrarian soap 'Emmerdale'. See the actors in make-up, and visit the studios and the specially constructed 'Emmerdale' village which is strictly off-limits to the public. Also included are interviews with the stars - will wheelchair-bound grumpyboots Chris Tate prove to be a bit of a sweetie in real life? And don't tell me that Kim Tate is really a lovely person, because I won't believe a word of it...

Retrieved from "https://emmerdale.fandom.com/wiki/Emmerdale:_Backstage_Pass?oldid=31157"
Community content is available under CC-BY-SA unless otherwise noted.