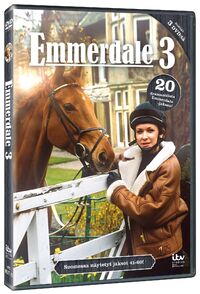 Emmerdale 3 is a three-disc DVD boxset released in Finland featuring 20 episodes of Emmerdale. Released by MMT Laukkanen on 14th May 2014, the boxset features episodes from 1990 that were originally screened on MTV3 in 1997. Seven other volumes, Emmerdale, Emmerdale 2, Emmerdale 4, Emmerdale 5, Emmerdale 6, Emmerdale 7 and Emmerdale 8 have also been released.

The boxset contains three individual discs and a total of twenty episodes.

Retrieved from "https://emmerdale.fandom.com/wiki/Emmerdale_3?oldid=219476"
Community content is available under CC-BY-SA unless otherwise noted.