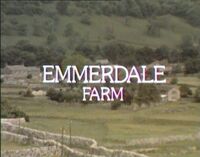 102 episodes were broadcast during the year. Major storylines included the programme's first murder, wedding and birth as the pace of the programme began to increase. Local teenager Sharon Crossthwaite (an early appearance from award-winning actress and director Louise Jameson) suffered at the hands of the unhinged Jim Latimer in a murder which rocked the village at the start of the year. New couple Frank Blakey and Janie Harker married in March and Peggy Skilbeck gave birth to twins in April, marking the first birth and marriage in the programme. Things would take a devastating turn, however, when Peggy collapsed and died of a brain haemorrhage in July, leaving Matt a single father. Other storylines included Jack Sugden getting a new companion in tramp Trash and Joe Sugden finding romance with Trash's daughter, Penny Golightly. The wheels were set in motion for partnership between Henry Wilks and Amos Brearly at The Woolpack as Henry covered for Amos following his brother's death in October and shoplifting shopkeeper Alison Gibbons arrived in the village from Liverpool and took over the Beckindale Shop in the summer with Henry Wilks showing great interest in marrying her.

Changes would begin behind the scenes as David Goddard quit his role as producer with his last episode being Episode 26 (16th January 1973), while Peter Holmans continued as executive producer until Episode 88 (21st August 1973). As of Episode 79 (23rd July 1973) the role of producer was filled by Robert D. Cardona, who continued as sole produces after Holmans quit and who would stay with the programme for almost three years.

Three main characters went on to leave the show this year, the first being Gail Harrison as Marian Wilks in January. Marian moved away from the village and eventually ended up in New Zealand before settling in Rome. Gail would return to the show in 1974 and 1977 but on both occasions her stay would be no longer than a month. Marian would later appear on the show for an equally fleeting return in the 1980s, this time played by a different actress. Jo Kendall departed as Peggy Skilbeck in July, collapsing and dying as a result of a brain haemorrhage. Peggy would be the first child of Annie Sugden's to depart by death but most certainly not the last. The biggest cast departure of the year though was Andrew Burt as Jack Sugden. Andrew left the programme on-screen in October amidst fears of becoming too familiar to people as a particular character. He returned to work in the theatre - his first love. Andrew would return in 1976 for a fleeting visit, similar to Gail Harrison, but would go on to be replaced permanently by Clive Hornby in 1980.

From 2nd April, in addition to its afternoon slot, YTV and Tyne Tees began showing evening additions of Emmerdale Farm following News at Ten. Each Monday would see two episodes broadcast beginning with Episode 1 under the title of 'The Early Days of Emmerdale Farm'. Around the same time, original afternoon showings began to increase to around the 3 million mark.

Retrieved from "https://emmerdale.fandom.com/wiki/Emmerdale_Farm_in_1973?oldid=222268"
Community content is available under CC-BY-SA unless otherwise noted.