The Gerry Roberts Memorial Garden is a fenced-off garden located within the Cemetery to commemorate deceased ones who were well known in the village.

The memorial garden is first established in July 1994, with Eric Pollard leading a service to officially open the garden to remember the 259 victims of the Plane Crash in December 1993.

People gathered in the garden after Terence Turner's funeral in November 2006, where father Alan revealed to Betty Eagleton that his daughter Steph had killed Alan's partner Shelly Williams.

As David Metcalfe was unable to take wife Tracy to Thailand, he transformed the garden into a Thai beach in September 2017 and they renewed their vows in front of their family and friends. 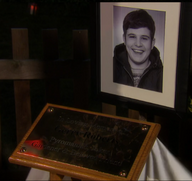 After thinking that he had ended Gerry Roberts' life in May 2018, Doug Potts carried out some community service on both the garden and the Woodland Walk. Doug felt like a father figure to him, and decided to dedicate the garden to Gerry in September 2018, officially opening it on Bonfire Night.
Retrieved from "https://emmerdale.fandom.com/wiki/Gerry_Roberts_Memorial_Garden?oldid=193938"
Community content is available under CC-BY-SA unless otherwise noted.