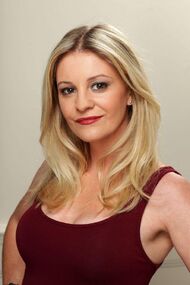 Nicola Stapleton (born 9th August 1974) is a British actress who appeared as Danielle Hutch on Emmerdale between September 2008 and March 2009.

She also appeared in the 1980s 'Cannon Movie Tales' films Snow White and Hansel and Gretel, as well as TV shows Simon and the Witch, Bad Girls and Thomas & Friends. She is perhaps best known to audiences as Mandy Salter, who appeared in rival soap Eastenders, from 1992-1994 and 2011-2012, as well as the 1993 Children in Need crossover special with Doctor Who, entitled Dimensions in Time.

Retrieved from "https://emmerdale.fandom.com/wiki/Nicola_Stapleton?oldid=229761"
Community content is available under CC-BY-SA unless otherwise noted.