Emmerdale Wiki
Register
Don't have an account?
Sign In
Advertisement
in: Buildings in Emmerdale, Buildings in Main Street, Locations

Pear Tree Cottage is a cottage owned by Home Farm Estate. It was a residential property until 2004 when the King family decided to convert the property into an office to run their business King & Sons from. Since 2014, Bernice Blackstock has ran her beauty salon Beauty & Bernice from the front area of the property and Megan Macey and Leyla Harding have ran their wedding planning business Take A Vow from the back office.

In 2020, Mandy Dingle and her adopted son Vinny stayed in the cottage for short time after Sam and Lydia kicks them out of the house during lockdown.

It is unknown when exactly Pear Tree Cottage was built. But it wasn't always the home of businesses in Emmerdale. John Tuplin, who worked for NY Estates, lived there for a while in the early '80s with his wife Mary and their four children.

Steve Marchant, who was married to Kim Tate, lived in Pear Tree Cottage from March 1996 to January 1999. Over time, Scott Windsor, Marlon, Charity and Tricia Dingle have lived at Pear Tree Cottage. Chas Dingle, Danny Daggert and Sydney Woolfe were the last tenants to live there before the Kings kicked them out to run their businesses from there.

King & Sons was a company owned by Tom King that he ran with three of his four sons Jimmy, Matthew and Carl. Tom bought Pear Tree Cottage to use as the office for his company in 2004. The firm was involved in Plant Hire, Security Services, Waste Management and Property Development. After Tom and Matthew died in 2006 and 2008 respectively, Jimmy and Carl continued to run the business until it went bankrupt in 2009.

Emmerdale Haulage was founded in 2009 by brothers Jimmy and Carl King after they went bankrupt. They started with one truck and used Pear Tree Cottage as their office. The family business was originally called 'King & Sons.' and was founded by Carl and Jimmy's father Tom King, but was renamed when the two brothers re-founded it.

Charity Sharma manipulated her way into the company in 2012 with the help of her father-in-law Rishi Sharma after blackmailing their way to the Stikes contract without having any trucks or drivers. They manage to persuade Carl to sell his share to her before his death but the paperwork wasn't completed and Carl left Jimmy his share in his will. In 2014 Charity moved the company up to Home Farm after she dissolved the company and restarted as Home James Haulage out of spite due to her divorce as Rishi was demanding his investment back. After Charity went to prison in early 2015, Jimmy moved Home James Haulage up to the offices on the Holey Scrap site.

Beauty & Bernice is a beauty salon, located in the front room of Pear Tree Cottage. It was set up by Bernice Blackstock in 2014, who then hired Kerry Wyatt when she was impressed with her work. Since Bernice left the village in 2019, it was been run by Kerry and Mandy Dingle. 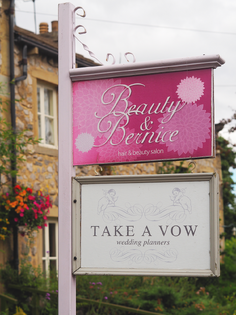 Beauty & Bernice originally started out as both rooms of Pear Tree Cottage, but was soon divided as Leyla and Megan wanted the back room for their new business, 'Take A Vow'. Beauty and Bernice now remains as the front room and upstairs leading from the spiral staircase in the front. Since the beginning of the business, there have been a few memorable moments, like Bernice to give Andy Sugden a spray tan, telling him to take his clothes off, and Bernice giving Katie Sugden an allergic reaction to one of her creams. It is eventually revealed that it was Gabby's fault.

Take A Vow is a wedding planning business set up in 2014 by Leyla Harding and Megan Sharma, located in the backroom of Pear Tree Cottage. This idea of both women going into business together was started by Jai Sharma, after both Megan and Leyla battled it out for a job at the sweet factory, which they both lost. They decided to wipe the smile off Jai's face and go into business together. Megan and Leyla didn't have the best working relationship as Leyla had an affair with Megan's then-partner Jai and she Leyla thus bought her out of the business in late 2015. However, after Leyla and Megan made peace over the affair with Jai, Megan bought back into the business.

In August 2019, Megan left the village in Leyla's hand after the death of her boyfriend Frank Clayton, but stayed on as a partner as Leyla couldn't afford to buy her out. However, the following month when Megan wanted out, Leyla sold her share to Andrea Tate.

Community content is available under CC-BY-SA unless otherwise noted.