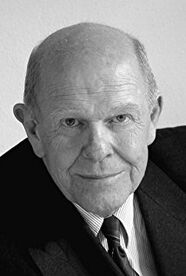 Peter Cartwright (30th August 1935-18th November 2013) was a South African actor who made hundreds of appearances in television, film and on radio and worked extensively in the theatre.

He appeared sporadically in Emmerdale between 2000 and 2010 as Bishop George Postlethwaite.

His other credits include movies such as Harry Potter and the Order of the Phoenix, Wimbledon and Gandhi, whilst he also appeared in shows like Doctor Who, The Vicar of Dibley, Yes, Prime Minister and Danger UXB.

Retrieved from "https://emmerdale.fandom.com/wiki/Peter_Cartwright?oldid=121789"
Community content is available under CC-BY-SA unless otherwise noted.