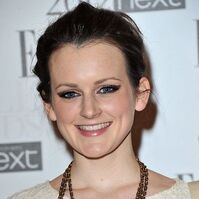 Sophie McShera (born 17th May 1985 in Bradford, West Yorkshire) appeared as Danielle Honeywell, a classmate of Victoria Sugden, in November 2007.

She is best known for her roles of Ros McCain in the BBC school drama Waterloo Road from 2009 to 2010, and Daisy Mason in the ITV period drama Downton Abbey from 2010 to 2015 (plus the 2019 film adaptation). Other television credits include Doctors, Survivors, The Job Lot, Galavant, Inside No. 9, Murdoch Mysteries and London Kills.

In additional to her television roles, she has also appeared in Disney's 2015 live-action film adaptation of Cinderella, and The Personal History of David Copperfield.

Retrieved from "https://emmerdale.fandom.com/wiki/Sophie_McShera?oldid=225880"
Community content is available under CC-BY-SA unless otherwise noted.