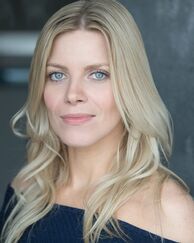 Vanessa Hehir (born 1981 in Manchester) appeared as Summers, a nurse who took care of Jackson Walsh after he was paralysed from the neck down in a car accident, between November 2010 and April 2011.

He is best known for her roles as Rosie Cartwright in the ITV period police drama Heartbeat from 2004 to 2007, and Sue Spark in the BBC school drama Waterloo Road from 2013 to 2014. Other television credits include Doctors, Holby City, Hustle, Stella, Unforgotten, The Dumping Ground, Down to Earth and Grease Monkeys.

Retrieved from "https://emmerdale.fandom.com/wiki/Vanessa_Hehir?oldid=224375"
Community content is available under CC-BY-SA unless otherwise noted.